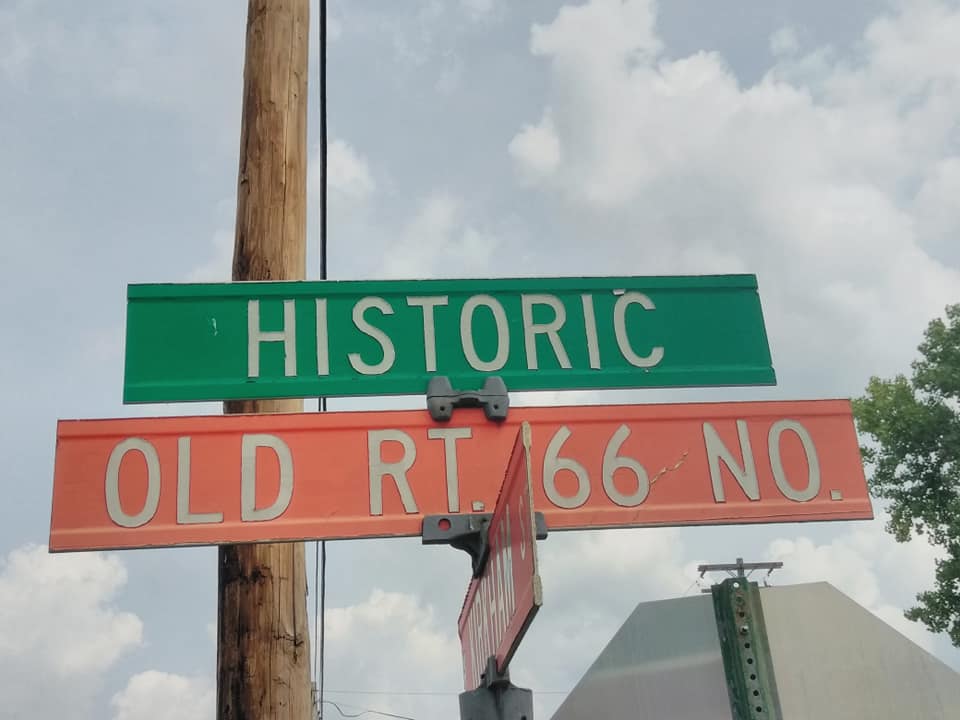 Greetings lovelies! After soaking up as much STL as humanly possible we are now homeward bound down historic Route 66, so hold on as we pass some kitschiness on our last leg of our journey back to the “City of Big Shoulders“!

First stop, some Native American history that’s located just over the Mississippi River in Illinois, the very historic and very tall, Cahokia Mounds! Get ready for some great views, a good workout and a major history lesson from the world heritage site!

This site is an archeologist’s dream, a protected UNESCO heritage site just a stone’s throw away from St. Louis. Cahokia is considered the largest and most complex archeological site north of the great pre-Columbian cities in Mexico-and to think it’s located in cornfed Illinois! 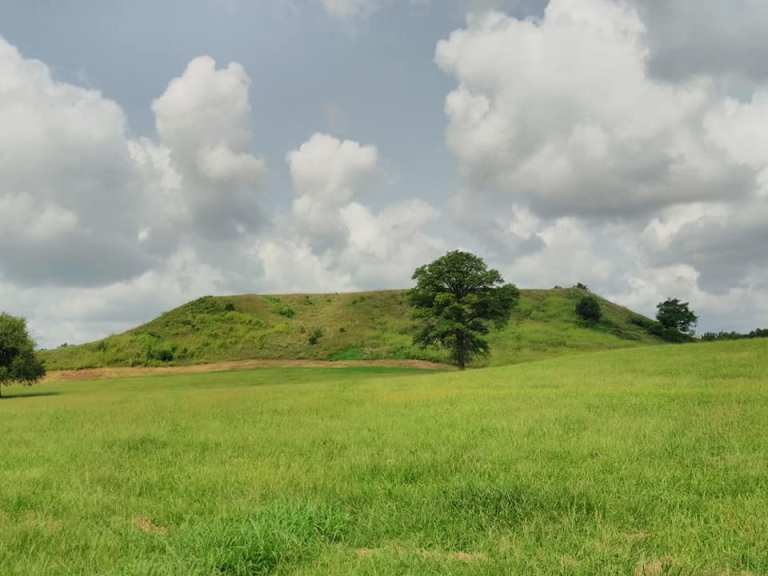 Standing at almost 1000 feet tall (955 to be exact) this mound towers over the surrounding flat area. On such a lovely, sunny day I’m glad I wore some sensible shoes because climbing this mound (giggity) is not going to be a walk in the park. (despite this being a national park)

Time to raise that booty! Hope you like climbing stairs because there is a good amount of climbing to get to the top. As the old wise saying from Lao Tzu goes “The journey of a thousand miles begins with one step” this journey begins with the first step up the stairs, followed by additional 153. Our “cakes” are going to look pretty sweet (no pun intended) once we are done. 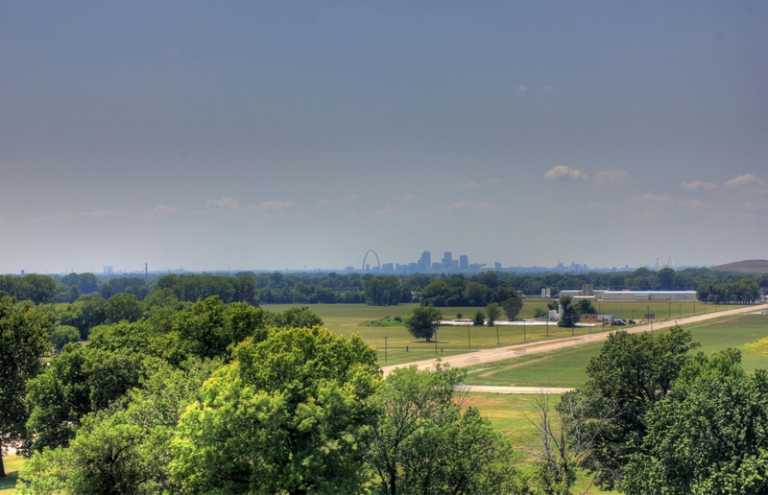 The views on top are worth it (as is the raised and firmed boo-tay you’ll get if you climb up and down enough times). Oh hi, St. Louis! I see you, girl! So after so many burned calories, sweating up a storm, and almost coming down with a case of the vapors,it’s now time to keep venturing down Route 66. P.S. The way down (giggity) from the mound is WAY easier than the way up. A lot of runners in the area run up and down the mound as training, so basically a Midwestern version of the famous Rocky Balboa running-up-the -steps scene. 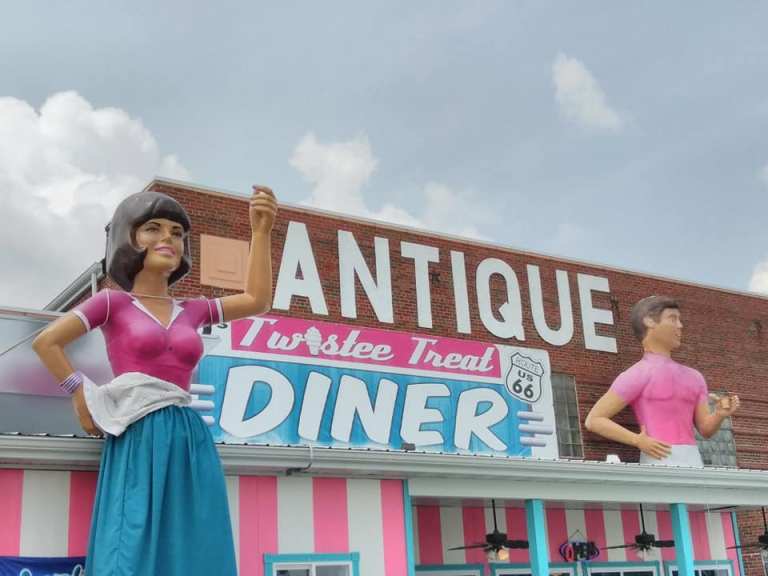 Next stop, Livingston, Illinois! Brace yourself darlings because the Pink Elephant Antique Mall isn’t for the faint of heart. This place is probably the epicenter of kitschiness in Illinois, if not the midwest. Housed in the former Livingston High School, this stop not only is an antique enthusiast dream but also has a general store AND a restaurant. Food, Fun, and Fashion–the Pink Elephant HAS IT ALL!

Did I mention how this place is kitschy AF? Clarence had to stop for a photo shoot in front of this out of the world (HA! HA!) UFO. Fun fact, I had to wait like ten minutes for a woman and her kid to pass by so they wouldn’t wonder why a sock monkey is stopping for a photo shoot. Well worth the wait though! 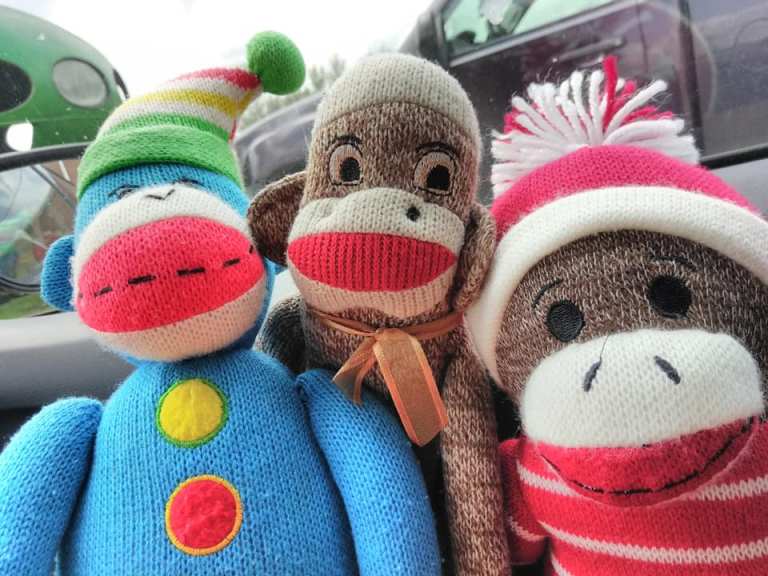 What did I end up walking out with? Despite SO many options, I found two new friends for my main man (sorry Jared) Clarence. Introducing Surly (left) and James (right), two new friends for Clarence to enjoy this portion of Route 66 with. Did I mention I am pretty obsessed with sock monkeys and have now 40 monkies to my menagerie? No? Well now you know and for a mere nine bucks for the both my bank account won’t be hurting. 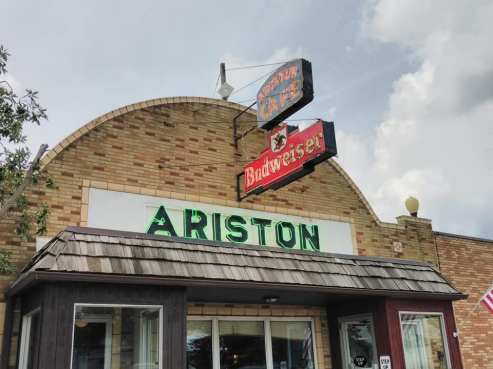 Okay, all that exercise and shopping has worked up quite an appetite and we are off to Litchfield, Illinois to dine at the legendary Ariston Cafe. We first visited this local institution about 6 years ago on our first trip to St. Louis and have been coming back each time we go through the area.

The Ariston Cafe is like stepping back in time to the glory days of Route 66. Founded in  1924 by Greek immigrant, this institution has been feeding hungry motorists for over 94 years. This restaurant has the bragging rights of being amongst the oldest (if not the oldest) restaurant on Route 66. With amazing food with generous portions, it’s no surprise why they have passed the test of time.

And what does someone like me who has a fancy AF (old lady) palate get for lunch? With SO many options I opted for my ABSOLUTE favorite old-timey diner food- Liver and Onions! Sweet Catholic Jesus how I love this dish. It’s the dish my grandma makes me when I come by for a visit and it not only holds a special place in my stomach but also a special place in my heart.(aww)

Aside from famed eateries Litchfield also is home to the Litchfield Museum & Route 66 Welcome Center. Free to enter (but gladly taking donations) this museum is a must stop when you visit Litchfield. Aside from the history of the famed route, the museum also exhibits town history and of course, the monumental role Route 66 played in shaping the town’s history as well as it’s future.

Litchfield, it has been a pleasure and I’m pretty sure my jeans are going to burst so onto the next town from such a feast, onward to Elkhart!

Oh, Elkhart, Illinois, the tiny little hamlet where America’s darling stopped for a bite to eat back in 1938. Shirley Temple (as well as her entourage) stopped here at The House by the Side of the Road cafe for lunch, totally flooring this tiny town with her presence. SO floored that the town created this silhouette of her likeliness(erected in 2015) to remember such a monumental occasion. It’s a cute, quirky roadside attraction that pays homage to America’s sweetheart and the happiness she brought to Elkhart during the height of the Great Depression.

Clarence had to stop for a photo shoot with Miss Shirley Temple. I’m curious to know if people seeing me placing a sock monkey in various places wonder what the Hell I’m doing but honestly, life is too short to care about what others think (YOLO!). 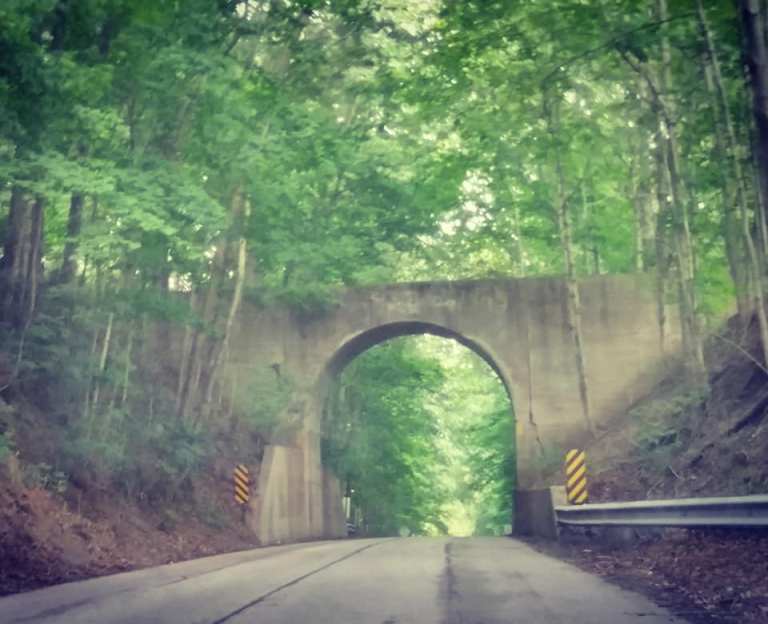 Elkhart also has this pretty spooky bridge (officially called the Gillette Memorial Arch) that runs along the cemetery. I can only imagine how scary it is on Halloween. The sun is starting to set, the darkness is creeping in( that sounded emo AF) and we still have quite a bit of way to make it back to Chicago. So I don’t think anymore stopping will occur along the way……so next stop, Chicago! Let’s cross our fingers and toes that we make it back in one piece. Stay tuned!