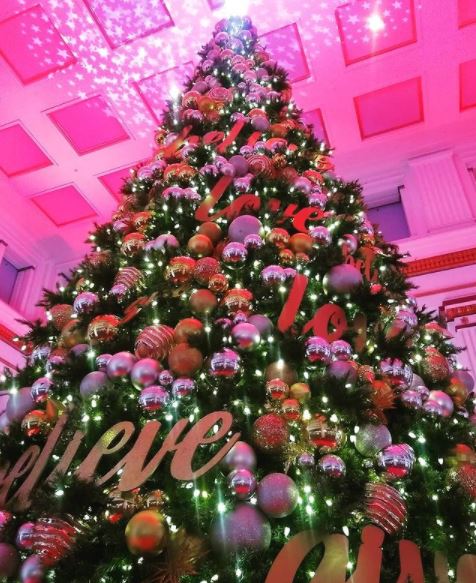 Nothing stops Chicago during Christmas, not even the worst pandemic to hit the United States in over 100 years! Personally, I’ve held a grudge against Macy’s ever since 2006 when they officially changed the name of Marshall Field’s & Company to Macy’s. Many Chicagoans felt the same; losing Field’s was losing a major part of our history. Many refused to shop at Macy’s; I personally avoided the store for 14 years. However, with everything else crazy that occurred in 2020, I figured it was time to end my war, head to the Grand Dame of State Street, buy some Frango’s, and lose myself again in this Chicago institution.

The Walnut Room, a Chicago tradition since 1907, embodies Christmas in Chicago

My first ornament purchased at Macy’s, although not the same quality as the ornaments that Marshall Field’s had (Field’s was the classiest of bitches and had Radko ornaments). Also, it was 80 percent off, so I tossed that thing in my bag.

Every time I go to the old Marshall Field & Company building, the building still wows me; I am floored by how beautiful it is. New York City never had anything on Chicago! Field’s famous Louis Comfort Tiffany mosaic tiles are stunning; head to the fifth floor to see them all their glory. The famous Tiffany Dome has been wowing shoppers since 1907.

Macy’s windows were good this year. After YEARS of bad windows and lackluster designs, they nailed it this season. Chicago, having suffered so much unrest this summer, a declining economy, and being the Covid epicenter of the Midwest, their windows were a ray of sunshine.

Of course, the year I ended my personal Cold War with Macy’s, the Walnut Room was closed because Chicago enacted an indoor dining ban, so I took the Walnut Room to go! Can’t beat the Walnut Room’s famous Mrs. Hering’s FAMOUS chicken potpie! A culinary delight from the 1890s!

Hopefully, you all had a wonderful Christmas/Holiday as well. If we all cross our fingers, HOPEFULLY, the holidays in 2021 will be normal again.