So every month or so I will do what I call a “Me Day”. This is basically where I tackle my Chicago Bucket List, and hit up various attractions around town & drink at random, and charming bars. Even as a native there are SO many things I haven’t done, or haven’t done in forever and a day (i.e. the , Willis Tower observation deck). So a predicted dreary, and rainy day is a PERFECT time to explore the many nooks and crannies that is Chicago’s Loop—-and this time I’m not alone! I lured my friend Erik to come along so we are hitting up downtown on this moist day. So buckle up—-er rather have your CTA pass ready because we are off on the Red Line to downtown Chicago!

First things are in order….

BREAKFAST!! At the lovely, historic, and grand AF Pittsfield Building

The Pittsfield is an Art Deco delight that dominates over the corner of Wabash and Washington. Oiriginally built for Marshall Field and Company, and named after Field’s hometown of Pittsfield, Massachusetts, it’s always been somewhat of a cursed building. Built at the cuspit for the Great Depression, it long failed to lure commercial tenants, it currently houses condos which seem to be a good fit for the building since a downtown address is en vogue these days. The lobby is stunning and despite the signs saying there is a shopping arcade in the basement, there is not. Which breaks my heart because I love me a shopping arcade. However, what’s the best part of this beautiful lobby? You can eat diner food in the middle of it. YES! The Pittsfield Café, is a diner located in this lovely building, offering delicious and inexpensive grub! I ordered the Santa Fe breakfast burrito was stuffed beyond belief, and it only cost thirteen bucks. YOU. CAN’T BEAT That! Also, for a diner they serve a pretty good cup of coffee. So after much urban studies talk and cups of coffee, we were stuffed and ready to start the day.

However, the sky really began to fall then, so after grabbing an umbrella at Target at Sullivan Center, we are off to somewhere I’ve been wanting to go to for a month of Sundays…..the Fine Arts Building! In my defense, it’s only been in existence since 1884 so it’s basically new, hence why my dainty toes haven’t graced it’s threshold. It’s grand, maybe grand is an understatement, designed in 1884 by famed architecture Solon Beman (of Pullman, Chicago notoriety) this building has witnessed so much of Chicago’s history throughout it’s long history.

Oh Fine Arts Building, you’re magic. It’s like being transported to the late 1800’s and it’s incredible to think that big names such as Frank Lloyd Wright have not only walked these halls, but worked here (check the placards next to the doors to see who worked in a particular office). So much history in one building, it’s phenomenal.

Originally built as the Studebaker Theater (Studebaker, as in the car company from Indiana) this building today still houses a theater, among various artist studios ranging from decorators, painters, musicians, dance studios, recording studios to random things such as the Jazz Institute of Chicago and  Daughters of the American Revolution. It’s a hodgepodge of quirkiness all contained in these granite walls at 410 South Michigan Avenue. 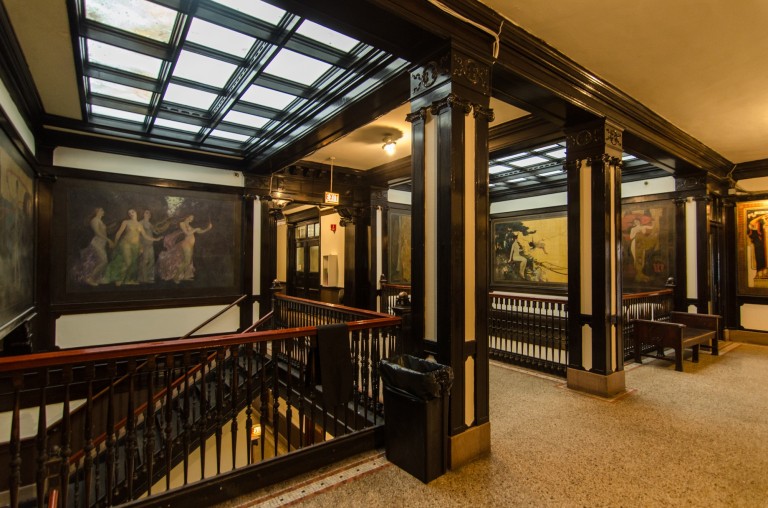 Ride to the top floor and work your way down (giggity), the best part of getting to the top floor is the elevator is still run by an employee! YES! A total time warp!  It’s the last elevator in the city that’s run by a person! Once you get to the tenth floor you will be treated to an array of breathtaking art.  The murals from 1898 are awe inspiring, lovingly restored, and showcase the art that was en vogue during the construction of this building.

So hidden somewhere in the building (I’ll tell ya it’s on the 5th floor so you won’t be wandering lost AF as we were) is the famed Venetian Court, a little slice of tastefully done Venice in the center of an amazing building. The Venetian Court in my opinion, and I’m sure with many others, is the piece de resistance of the Fine Arts Building . The sky was literally falling when we went into the courtyard but it’s still a breathtaking and intimate hidden gem. 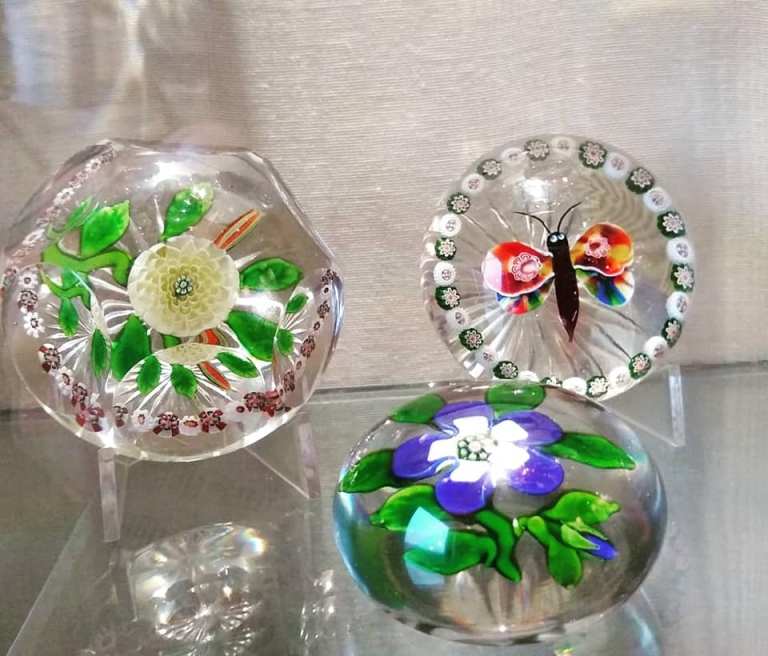 Speaking of gems……. also, among the many music and art studios, is a studio dedicated purely to paperweights! Now these aren’t the typical, boring paperweights one buys for a second rate uncle or grandparent……these are works of art. The L. H. Selman Gallery is a hidden treasure (located on the second floor), well some people may know about it but I legit just learned about this place two months ago and have become OBSESSED with it. 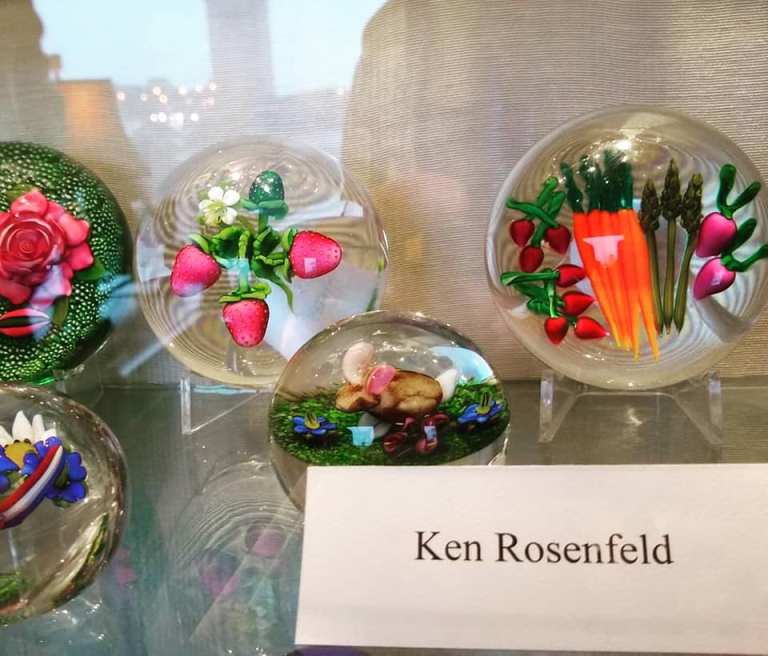 These tiny balls (giggity AGAIN) are amazing and the photos I took CANNOT due them justice.

I was so happy I read about this place on Atlas Obscura’s website. It can’t be missed, especially on a day that it’s raining cats and dogs (but not men as the song goes) but I was beyond tickled pink to FINALLY take this building off my Chicago Bucket List. Don’t let the imposing façade scare you away, it’s open to the public and definitely is a place I will be visiting again soon. Okay, so all that history, walking and sightseeing has gotten us thirsty…………….and since it’s one o’clock (and in my mind a socially acceptable time to start day drinking) off to bar number one! 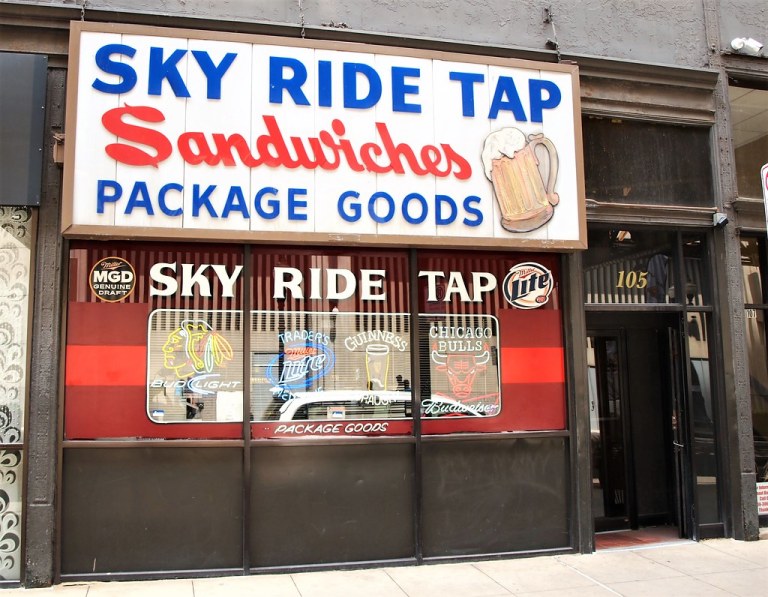 Sky-Ride Cocktail Lounge is a dive bar located at 105 West Van Buren, near the edge of the Financial District. It oozes Old Chicago character—-from the days when bars like this lined the many side streets of the Loop. Sadly as time went on and gentrification spread her whitewashed arms across the Loop, places like this shuttered and we replaced by everchanging trendy stores and restaurants. So a visit to Sky Ride is a must! It’s our , , privilege to keep places like this alive!

Surprisingly we weren’t the only ones in there, so either A. The three martini lunch is still a thing, or B. other people are all about that day drinking life, but regardless, the drinks are strong and cheap. I mean c’mon, where can you get a rum and coke in the Loop for six bucks?

So it’s been like four hours since we had caffeine (which is an INSANELY long time, lesbian honest here so I wanted to show Erik the most ADORABLE coffee shop that I know of. Hero Coffee on Jackson Boulevard ( 22 E Jackson Blvd to be exact)  This place is legit like Hogwarts, if you’re not in the know of where to go, you will miss it. It’s basically down the most enchanting alley I know and barely bigger than a postage stamp. The coffee is amazing, the alley court is great place to linger and I pray to the patron saint of coffee (St. Drogo) that this place always remains a coffee shop.

With caffeine pumping in our veins we had to stop in another alley, er sort of alley. Recently I read a book on the Iroquois Theater fire here in Chicago and have become OBSESSED. In case you didn’t know what that is, it was the biggest theater fire in United States history, killing 602 people, who died as a result of a tragic fire in the grand Iroquois Theater, currently on the site of the Nederlander Theater. They say the alley immediately behind the theater ( in reality a street named Couch Place) is haunted. I thought no better day than this dreary day to stroll down it. Alas, no ghost appeared in my photo but what’s sadder is this tragic fire is often times forgotten despite the tragedy sparking reform in fire codes not only here in Chicago but across the country and Europe. Okay, we need some cheering up and praise Jebus I know a place.

Second Story Bar! Streeterville’s hidden gay bar! Located at 122 E. Ohio, if you weren’t in the know about this bar you’d probably miss it. Located above the very taste Sayat-Nova Restaurant, this joint packs an incredible amount of kitsch.

An adorable bar, located in a two story commercial building sandwiched between two skyscapers—–basically the gay version of the movie Up. Walk up the steep staircase, have your ID ready(because they card HARD) and be prepared to transported to a bar that gives off the vibes of being in a cool basement. It’s dark, welcoming, super low key and it has cheap drinks!! Where else can you get a cocktail for six bucks off Michigan Avenue? Apparently dive bars love charging six bucks for drankz and I ain’t complaining!! 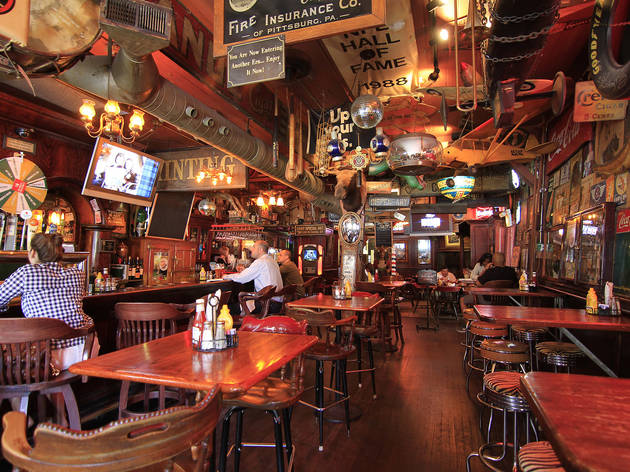 Green Door Tavern, getting Chicago drunk since 1921! Like every place in Chicago, the Green Door operated as a speakeasy in the roaring twenties. I’ve been here before but Erik was intrigued so off we went. Located a few steps from the Brown Line Chicago/Franklin stop (at 678 N. Orleans St) , this place is a great stop over on your way home if you ride the Brown Line.

Does this place have character, YES! Is it a dive bar? Hell to the NO! Jared came down to meet us here and his visit was a bit of a blur thanks to all that vodka, lesbian honest.  I mean we were there for FIVE hours until after 10 drinks, nomz and lots of hours of insane drunk talk, our tab was something like $160 dollars!   Can you put a price tag on atmosphere?! Yes and no, so until next week I will be poor bitch, but until then………YOLO!!

So after some twelve plus hours downtown we decide to head back home, it’s nearly midnight, we’re pretty buzzed, still kinda moist(giggity) and we are off to Milwaukee tomorrow so good night!