Hello again from the City of Brotherly Love!!!

On this episode, we explore the beauty that is Center City. Architectutally speaking Center City is a beauty, commercially it is on the upswing, but still has some ways to go. There are many vacant storefronts lining Market Street and the amount of homeless people here seems to blow the homeless population of Chicago out of the water. The East Coast is known to be suffering the horrible effects of opioid epidemic and you can clearly see many people high out of their mind. Even our local friends here said it’s easier to buy heroin than liquor but regardless no trip to Philly would be complete without a visit to the heart of the city!

Downtown is truly breathtaking and it’s best to start right smack dab in the middle at City Hall.  Probably the prettiest city hall I’ve ever see (sorry St. Louis) Philadelphia City Hall is grand, showy and meant to show off how amazing Philadelphia is. The statue of William Penn on the very top of the tower is the tallest bronze statue in the world! You can take a tour during the weekdays or simply stroll through it as we did on this lovely Saturday morning.

Since we arrived in downtown at the early hour of 9 am (HEY! That’s pretty early for a vacation, no judging) from north suburban Glenside via SEPTA where we are staying we decide we needed to get some breakfast.

There are plenty of dining options  in Center City, sit down, fast food but when you come to Philadelphia you have to visit Reading Terminal Market AT LEAST once. I can’t think of any other market that offers such variety, such character and so much damn neon! This place has legit been Philly’s market heart since 1893 and once you step inside you’ll understand why it holds such a special place in their hearts (awwww) and their stomachs. 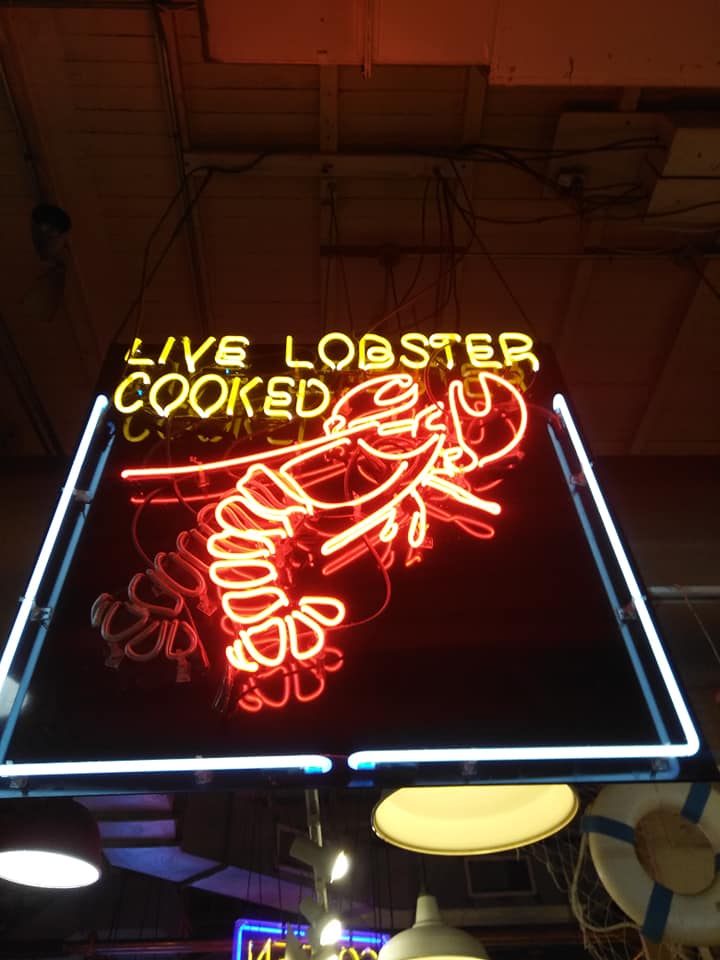 Neon! An overload of neon AND so many food options for you to try, you can sample all the foods known to Philly (soft pretzels, cheesesteak, water ice, etc) and foods from every nook and corner of the planet!

And more neon! If you can’t find something at Reading Terminal Market you must be either A. a liar, or B. Not hungry. That’s all I have to say about that. So go hungry, trust me, you won’t be disappointed!

We opted for the traditional (I assume traditional) Philadelphian breakfast….. soft pretzels. I assume natives eat this all the time and is the base of their food pyramid. Think not? Wanna fight about it 😉 Meet me out back, or wait, even better…..

“Meet me at the Eagle!” This saying had no meaning to me until I came to Wanamaker’s Department Store (I refuse to call it Macy’s because Macy’s is shit to me—-but I digress). This famous eagle came all the way from St. Louis where it grace the World’s Fair of 1904 (called the Louisiana Purchase Exposition for all you technical bitches out there) to sit in this vast monument of commercialism. Though not nearly as big as it once was originally, this place is still awe inspiring. The Central Atrium is a masterpiece (it’s even more incredible around Christmas) and it houses the world’s largest playable Wurlitzer Organ—which they showcase daily. Unfortunately the organ was being restored while we were there and underneath black canvasing but the show was still entertaining.

You may recognize this scene from the GREATEST movie filmed in Philadelphia!  Any guesses what I’m referring to (and if you guessed the Rocky movies you are sorely mistaken but I do appreciate you for playing)………Mannequin! Yes! The very elegant and grand Wanamaker Building was the fictional Price & Company Department Store in the 1987 cult classic movie, starring Kim Cattrall and Andrew McCarthy.

Not all of downtown Philly is thriving and bougie however, like all Rust Belt cities, Philadelphia too was hit hard by white flight to the suburbs and the lure to climate controlled malls. 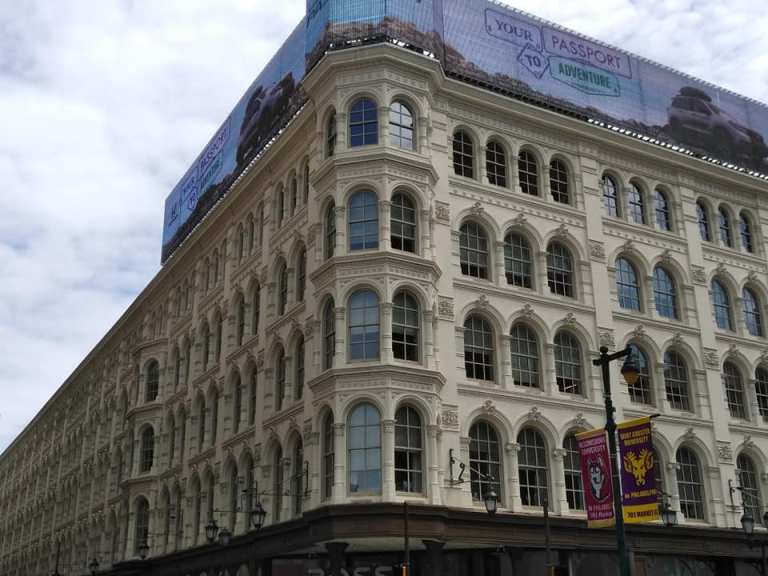 Lit Brother’s Department Store (Rest in peace) was another anchor of Center City that held on until the 70’s and sat shuttered. Luckily, historically conscious (us history nerds) fought off the demolition of this amazing Victorian building. Ironically, this one very bon ton (you uncultured bitches can look that term up) building houses pretty low end stores, especially for the city of one of the biggest cities in the US (Five Below, etc) P.S. If they had a Dollar Tree I’d be all over it like white on rice (no shame in my ratchet game!) 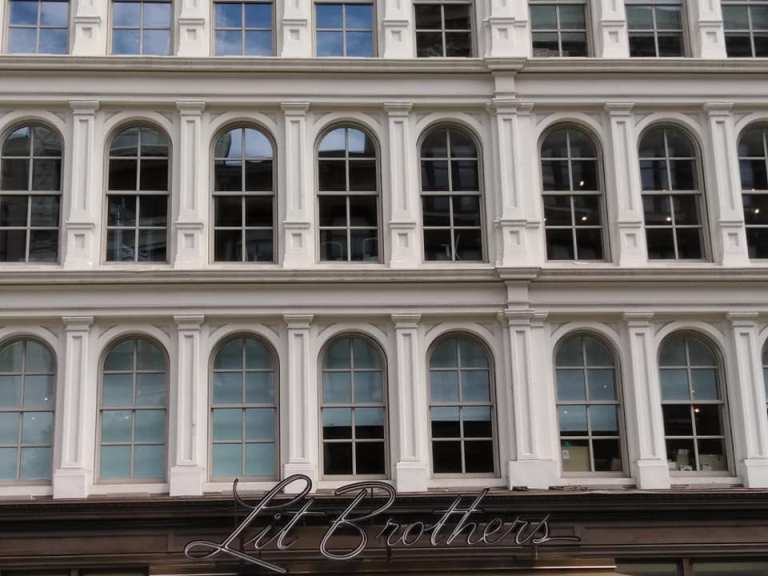 However it is lovingly restored, available for rent in case you wish to open an office downtown, and despite Center City’s rough edges there are several signs of rebirth. New stores are coming in (we shopped at the very exclusive WaWa and TJ Maxx) and many more long neglected buildings are being restored to their prima donna statuses. 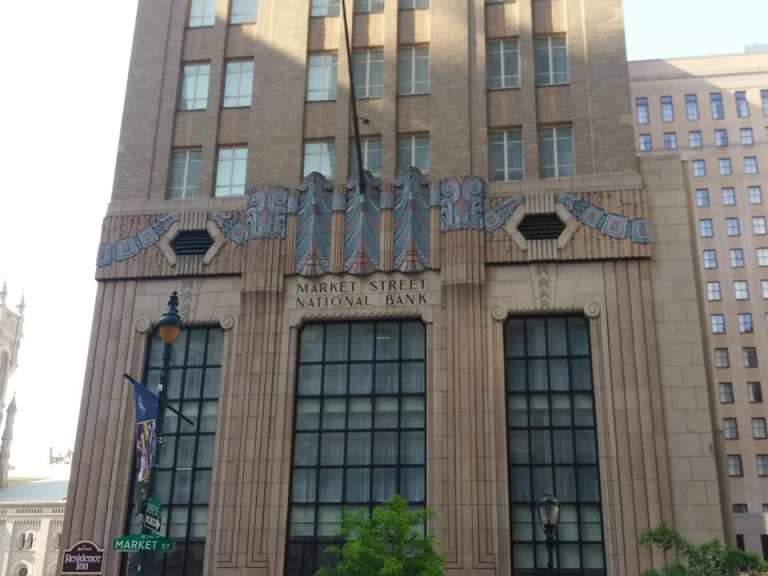 Stroll! I CAN NOT say it enough, stroll the lovely streets around City Hall Square. The architecture here is amazing and gives Chicago a run for it’s money! You know what’s the best part of strolling? Almost everything in Philly is centrally located off of downtown, walk one way and you’re in a totally different(and generally charming) area. Which you’ll hear about next week when we stroll out of Center City and dip into a slice of the Orient a block away from City Hall.