Sorry for the long absence! FINALLY graduating college, Christmas/Christmas parties/life getting cray AF (in good ways) has caused this blog to be placed on the back burner……but no longer! We are back and we are super excited to share with you all our magical journey through the quirky heartland of America!

I’m sure anyone from Chicagoland, or the Midwest in general has noticed this winter has seemed SO damn long. Literally it’s felt like we have been barricaded indoors for forever but with a mild day (ANYTHING was mild compared to that historic Polar Vortex we experienced, but I digress) we decided to take a drive to McHenry County to see what the Groundhog Day celebration is all about. I’ve read about it, I’ve seen it on television but never actually gone. Time to change that! Onto the quirky, darling city of Woodstock, IL. 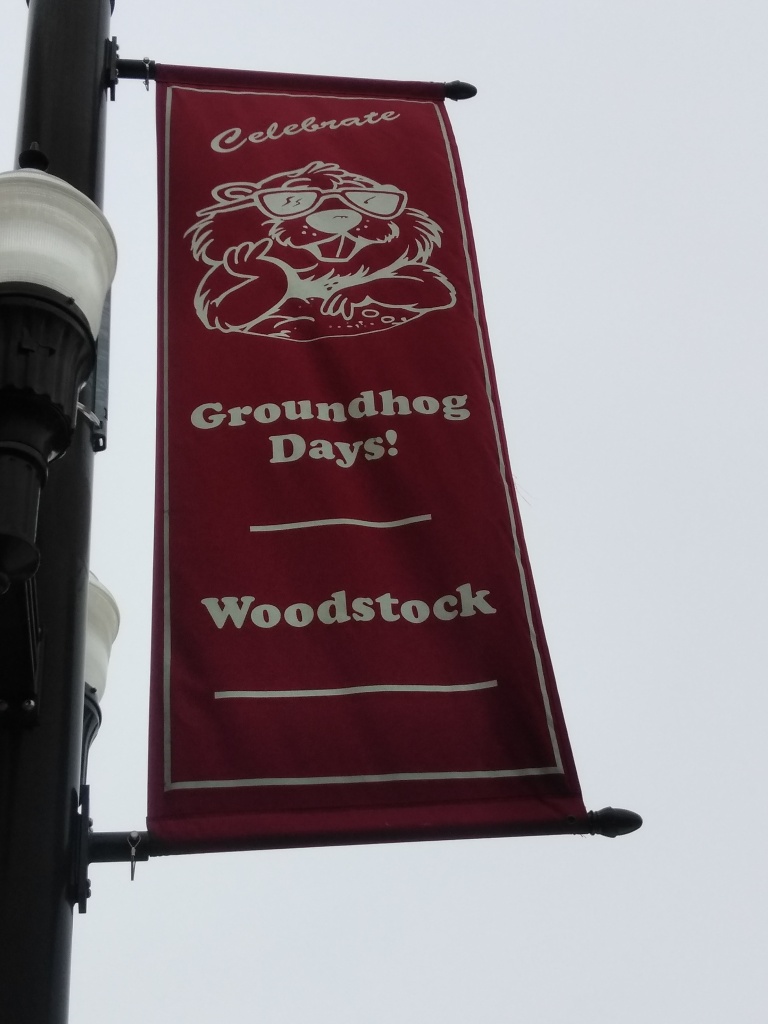 Woodstock, Illinois is a charming, quirky and unusual little city of about 25,000 people. It’s charming because of it’s perfectly preserved Victorian architectural charm. it’s picturesque town square and lovely boutique shops. It is quirky because of the Groundhog Day Festival.  In case you didn’t know (or have been living under a rock for 20 years), the 1993 movie Groundhog Day was film here, beating out Punxsutawney, Pennsylvania (because it’s kind of gritty) and ever since then, the town gathers to celebrate that fact. So what makes Woodstock unusual?  Woodstock SO incredibly liberal. It has the McHenry Pride, a Buddhist temple and a general “live let live” attitude that’s makes it stand out compared to the rest of McHenry County where MAGA hats are plentiful. 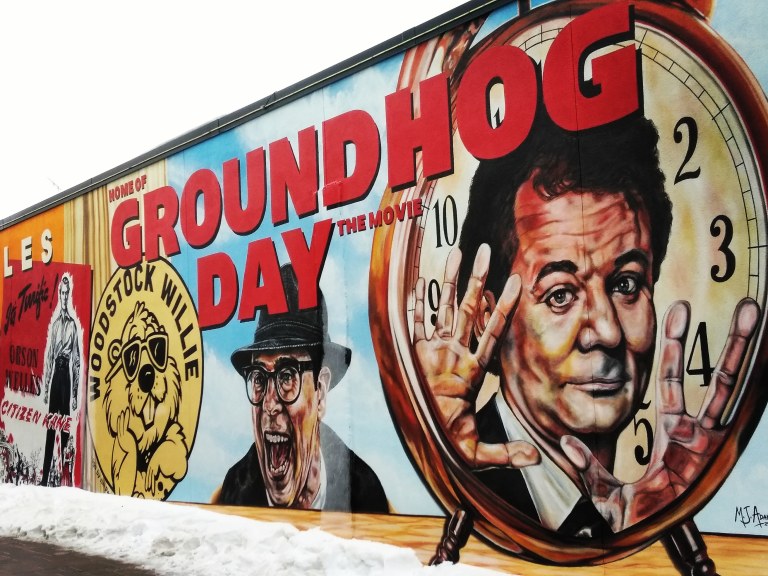 But today the WHOLE town is celebrating Groundhog Day! Bars are serving cocktails made of Sweet Vermouth and orange twists (tastes like shit), boutique shops selling Vermouth scented soap(Jackass Charm Soap) free showings of Groundhog Day at the Woodstock Theater, and guided tours. YES! This town does not play around with this holiday and draws in quite a crowd each year. 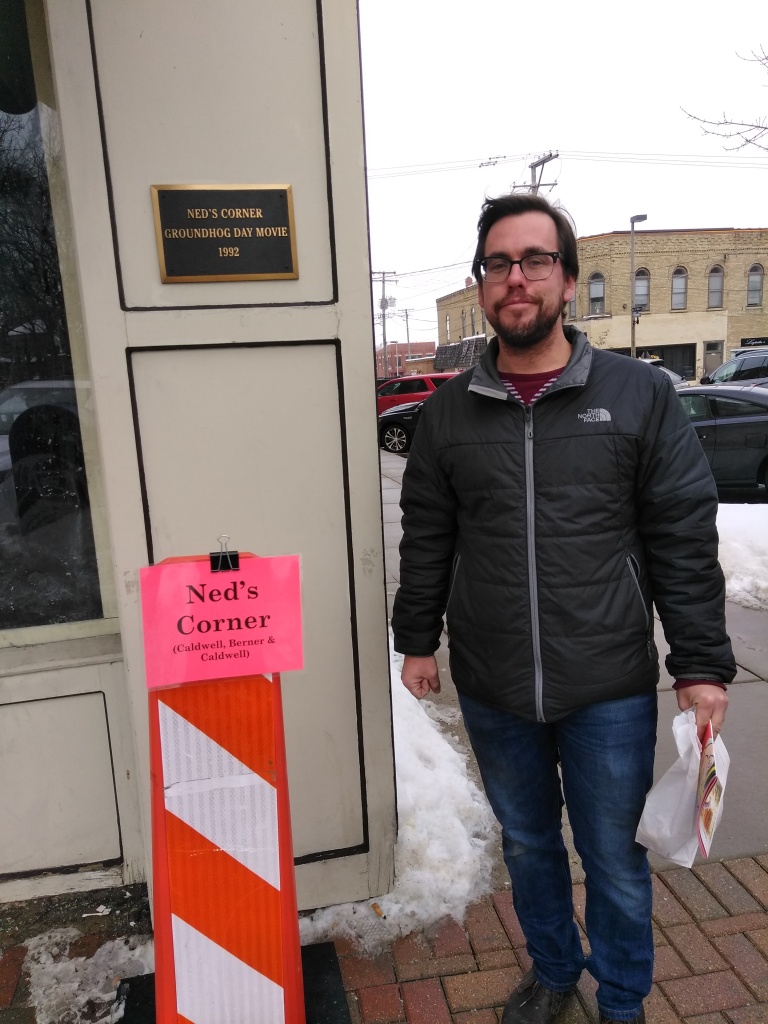 Here’s Jared at the famed “Ned’s corner” Throughout Woodstock, the areas seen in the movie are marked with these bright cones. The rest of the year you can follow the tracks of Bill Murray by reading the brass plates nailed to various buildings around town (Yes, Woodstock takes the movie so seriously that brass markers grace the facades of 100 year old buildings.) 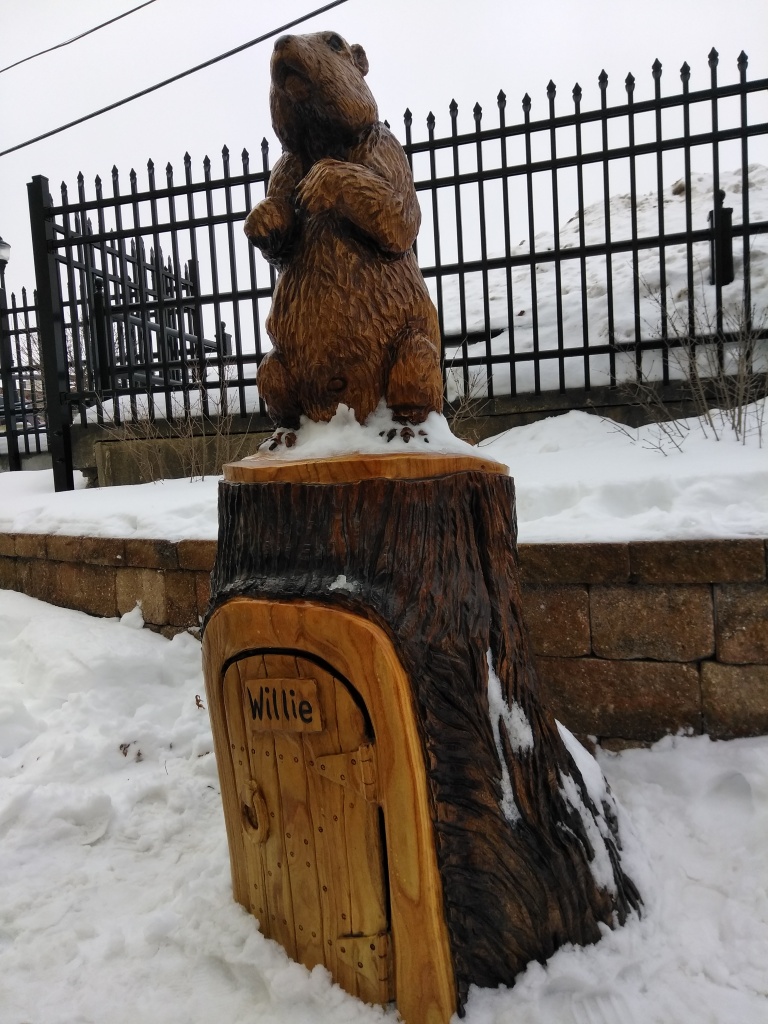 Woodstock Willie is the local groundhog that predicts whether spring will arrive early or not (this year he said we are to get an early spring, but I heard through the grapevine he is currently under investigation for fraud—but that’s none of my business) Fun fact, the town of Punxsutawney would not lend their groundhog, Phil because they were snubbed by the not having the movie filmed in their town. So Woodstock got it’s own groundhog (two in fact) which appeared in the movie. In the scene where Bill Murray is driving around town with the groundhog, the reason he is driving with gloves on is not to be fashionable AF, instead it is for protection…….groundhogs are cranky AF and bite a lot. Under those leather gloves are mesh metal gloves. Ain’t nobody got time for an angry groundhog!

And here we are with the mammal of honor……….Woodstock Willie! During the festivities Willie was strolling around Woodstock Square posing for pictures.

As I said earlier, Woodstock is a darling Victorian city. Fueled by early industries such as typewriter construction (Woodstock was the Typewriter City for a century with not just one, but TWO typewriter factories, Emerson Typewriter Company and the Oliver Typewriter ) and dairy farming. Woodstock was not only the largest city in McHenry County but also it’s cultural and social hub. Famous celebs that have ties with this small town including Orson Welles, Chester Gould (creator of Dick Tracy) and more recently, Jessica Biel.

Woodstock’s famed Opera House (as seen in Groundhog Day as the Pennsylvania Hotel) has dominated Woodstock Square since 1892. Still a functioning event venue, it has hosted such big wigs as Martha Stewart, Barack Obama, Paul Newman, and Tom Bosley. Stunningly restored and preserved, this building is an architectural junkie’s wet dream.

It’s pretty awe inspiring that this view has remained the same for over a century. Woodstock continues to charm me, regardless of how many times I visit. A tiny city that seems to have one foot stuck in the 1890’s and another foot in the current day. A bastion of liberalism and open-mindedness in pretty conservative McHenry County.

Until next time lovelies!